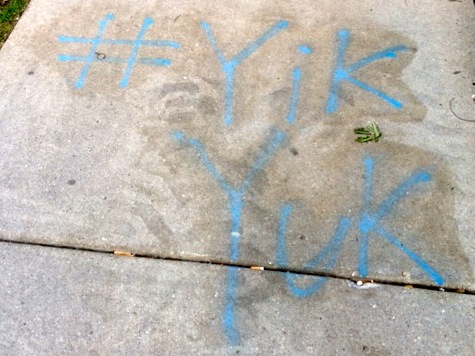 But What is a Yak?

Dear Parents, this is Dr. Rossi. I need to alert you about a relatively new and very destructive form of social media known as Yik Yak.

Yak (noun): a trivial or unduly persistent conversation; to yak (verb): talk at length about trivial or boring subjects. Also, a yak (noun): a large domesticated wild ox with shaggy hair, humped shoulders, and large horns, used in Tibet as a pack animal and for its milk, meat, and hide.

Yik Yak: a new social media app launched in early 2014 that allows users to submit anonymous comments relevant to the area. Feeds are based on geographical location, making them ideal for college campuses. The app took East Coast colleges by a storm and slowly trickled down, as anything does, to the high school level. But this does not look like another medium that middle-aged parents and angsty pre-teens will soon overtake (*ahem* Facebook.)

This communication software has been linked to many incendiary, false, and otherwise inappropriate commentaries, mostly delivered by school age and collegiate students. It is banned on our campus and will be blocked through our network.

It must be noted that the Bring Your Own Device network does not actually function for most devices. I, along with many of the MDO staff members, have attempted to connect to the network multiple times and have consistently failed: after accepting the Terms and Conditions, the webpage brings us right back to the log-in. If other students face issues like this, blocking Yik Yak on the network will not do anyone any good because no one is actually using the school’s network. Luckily, the creators of the app have got Dr. Rossi covered.

When Yik Yak was created by two college students, they faced a lot of heat for violating anti-bullying rules: there were no restrictions on who could say what and where they could say it. Because the “yaks” appear on feeds based on geographical location, it’s of the upmost importance that certain areas are restricted from usage of the app. Since its launch in early 2014, the creators of the app, Tyler Droll and Brooks Buffington, have restricted access to users that are too close to high schools. The creators recognized that pairing anonymity with high schoolers is a dangerous formula and rectified the loophole. Barely a foot beyond school grounds is a different story: Nikki Taylo, an MHS student and Madison resident who lives right next to campus, can access the app from her house.

However, there are a number of ways your child can access and download this program. As such, we want you to help and assist our efforts to keep school safe for everyone. After a cursory review, Madison Public Schools acknowledges that there are inappropriate comments that we are very concerned about and will not tolerate.

The MHS Student Body is no stranger to anonymous cyber attacks. Anyone, regardless of having a Twitter account, heard about or saw the vicious tweets the DodgerAnonymous Twitter account released last winter. The backlash was swift and effective: the account stopped tweeting almost immediately. Some claim that Yik Yak is different: it’s supposed to be like this. “People like Yik Yak until they’re Yik Yakked and then they say, ‘it’s a horrible site,’” one senior noted.

Though Yik Yak is meant for “general griping” on behalf of college students about people, classes, and general distaste, the idea is that all comments refrain from identifying anyone in particular. High school students are not particularly skilled at this task of diplomacy: scorn for the app arose when students were targeted and “yakked” about incessantly. Senior Jessica Schuszler was yakked about negatively multiple times and deleted the app from her phone the same day she downloaded it. “I think it’s hurtful,” she asserts, “[Because it’s wholly anonymous,] It could be the same person commenting over and over again just to hurt someone and bring down their self-esteem.” Teachers all-across the board agree, calling it “terrible” and “harmful.” Mrs. Morganthaler, head of the PGC program at MHS, notes, “There aren’t any positive benefits from it.” In another vein, Mrs. Bergen comments that “that kids are not responsible enough to have an app like that. Anonymity gives way too much power to people to say things they would not say in person.”

MDO staff members Georgia Turvey and Tyler Simeone conducted a school-wide survey about Yik Yak and anonymous messaging in general. When asked how students reacted to any experiences of cyber-bullying, most claimed that they “shook it off” or were not bothered by it at all. Only one sophomore, two juniors, and three seniors (zero freshmen) asserted that they were hurt by the instance. At first glance, this is a great statistc: MHS students are thick-skinned and have self-confidence that, for the most part, cannot be shattered. But what about those few who feel a little more sensitive to this commentary? Or those who are targeted incessantly and tormented by cruel comments? Those people are our peers and it is our responsibility to take the steps to prevent those situations.

Mr. Robertson takes this responsibility seriously. When he first heard about Yik Yak in the Spring, all he understood was that the app could be dangerous and was potentially detrimental to the community. About a week ago, he downloaded the app himself and scrolled through the yaks to see what all the hype was about. “Most of the stuff was harmless,” he notes, “But there were a few things here and there that could really do some damage.”

Please be advised while that this software claims to be “anonymous,” there is a GPS component to the application that could potentially be used to identify individual users.

Other schools found bomb threats among the yaks and quickly apprehended the yakker through the GPS tracking. Though nothing amounted from such threats, the knowledge that perpetrators could be located is somewhat comforting. Mr. Robertson’s biggest fear, he asserts, “is that the police will not take such lengths against HIB and bullying if  it does not endanger the health and well-being.”  This speaks to a greater issue pervading schools and society: treatment of mental health. With their focus on the law rather than the mental and emotional effects cyber bullying could have on a young teen,  the police might not take action against such behavior. Mr. Robertson understands that trying to police the app himself would be a waste of time and energy, but encourages students to recognize that the app itself is as well: “There are so many better, productive things to involve oneself in. There’s really no point.” Students agree, calling Yik Yak “stupid,” “harmful,” “a waste of time,” and “boring.”

The list of activities MHS students engage in is more impressive than one could describe. MHS students are dedicated athletes, academics striving for excellence, performers of music and theater, set builders, coaches, tutors, award winners, producers of publications, and activists.   All of this amounts to a superb student body – and we choose to tarnish this with a silly anonymous application? Never mind the negative content of the app itself. What does it say about us, as a student body, that we are investing our precious time in an app that does little more than inspire a low chuckle? That does little more than waste time? That does little more than target and hurt our friends?

…We want to proactively address potentially destructive situations and insure the safety and security including cyber safety for all Madison students and employees.

From students to the administration, our school community concurs that the app is stupid, harmful, a waste of time and energy, and creates an influx of negativity. In order to reduce the negativity in our community, no matter how pervasive or insignificant that negativity may be, ignoring apps like Yik Yak is the first step. Senior Audrey Rowland makes a good point: “people will always find a platform for that kind of thing,” but that does not mean we have to engage in it.

After all, what is a yak? Turns out, no one really cares.