Pork Roll V.S. Taylor Ham; Which Side Are You On? 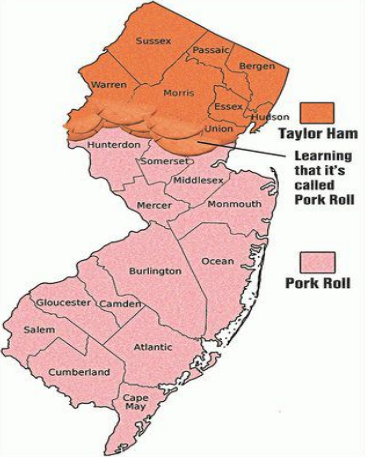 New Jersey is known for its beautiful beaches, aggressive drivers, and diverse culture. But one of its most talked about topics is based off the most popular breakfast food of New Jersey – taylor ham V.S. pork roll.

The taylor ham and pork roll dispute has been an on-going debate between North and South Jersey for years. But many ask, how did the argument between the two regions actually start? Many New Jerseyans know the famous Taylor Ham/Pork Roll packaging which is sold in stores throughout the state. According to the company Taylor Provisions of Trenton NJ, it was originally called “Taylor’s Prepared Ham” until the Pure Food and Drug Act of 1906 was passed. It forced the company to change the name to “Pork Roll” since the product did not meet the new legal definition of “ham”. The company then marketed the product as “Taylor’s Pork Roll”.

Although the facts about the name are layed down, North and South Jersey residents created a debate out of it, feuding for years upon years. While people in the North call it “Taylor Ham”, those in the South generally use the term “Pork Roll”. Eventually, this became the biggest and most superior dispute of New Jersey history. Though the argument may appear to be of little importance, you can ask any New Jersey resident on their opinion and most will be ready to back themselves up. It’s taylor ham.